Oak Park, Illinois – The recently mailed second installment property tax bills reflect modest annual changes compared to last year’s bills, with business taxes increasing by 2.5% and most residential properties experiencing smaller tax increases or even slight declines. These changes are primarily due to a tax levy increase of 1.4% from the taxing districts that serve Oak Park.

This year’s 1.4% levy increase was heavily influenced by Illinois’ Tax Cap Law, which is designed to match revenue growth with increases in the cost of government operations and taxpayers’ ability to pay. This is done by limiting most tax levy increases to the rate of inflation.

Since inflation in the United States has recently reached the highest levels in forty years, one might wonder how the Tax Cap Law limited local spending increases to just 1.4% this year. The reason for this is that we pay property taxes in arrears. So, even though this is calendar year 2022, we are paying 2021 taxes. And under the Tax Cap Law, 2021 tax increases are based on inflation for the one-year period that ended in December of 2020. In 2020, inflation was low as the economy struggled with the effects of the pandemic.

In 2021, however, the economy started to expand and for a number of reasons, inflation spiked. For the one-year period that ended in December of 2021, the rate of inflation was 7.0%. Taxpayers should be aware that under the Tax Cap Law, 2021’s higher rate of inflation will influence the calculation of 2022 property taxes that will be paid in calendar year 2023.

If inflation was 7% in 2021, does that mean property taxes will increase by 7% next year? Not necessarily. The Tax Cap Law allows most taxing districts to increase their levies by the rate of inflation, but only up to a maximum of 5%. Thus despite an inflation rate of 7%, most taxing districts will be limited to 5% levy increases. Exceptions to the Tax Cap Law, however, may result in additional increases that cannot be predicted at this time. Notwithstanding this uncertainty, it is clear that next year’s tax increases will be noticeably higher than this year’s.

Let’s get back to this year’s taxes. Did any taxpayers have above average tax increases?

Most people receiving the Senior Freeze, an exemption that provides significant savings for low- to moderate-income senior citizens, experienced tax increases of about 10%. This increase is due to the complicated relationship between the Senior Freeze and property tax rates, which can lead to tax increases for qualifying seniors in some years and tax reductions in other years.

Can I do anything to reduce my current tax bill?

If you are eligible for a homeowner, senior citizen or disability exemption but did not receive one, the Township Assessor’s office can assist you in obtaining a revised bill for a smaller amount. If you received all exemptions for which you are eligible, however, you likely will not be able to reduce your current tax bill.

Can I do anything to reduce next year’s tax bills?

Oak Park taxpayers can file appeals with the Cook County Board of Review through December 20, 2022. If successful, those appeals will impact the taxes due on next year’s second installment bills. Residents may call Oak Park Township at (708) 383-8005 to get help in preparing appeals.

Why were second installment tax bills issued so late this year?

Second installment property tax bills cannot be issued until all Cook County tax appeals are decided, first by the Cook County Assessor’s office, and then by the Cook County Board of Review. This year, a computer modernization project created compatibility problems between these agencies that led to a months-long delay in getting correct data from one agency to the other. As a result, the mailing of second installment property tax bills was delayed.

Do I have to pay another tax bill by March 1?

Probably not. During the legislative session that ended on December 1, 2022, the Illinois legislature passed a bill for Cook County that changed the due date for the upcoming first installment tax bills from March 1, 2023, to April 1, 2023. The bill, endorsed by the Cook County Township Assessors Association and other county and local government entities, won overwhelming support in the legislature. As of the writing of this article, the governor has not yet signed the bill, but he is expected to do so. 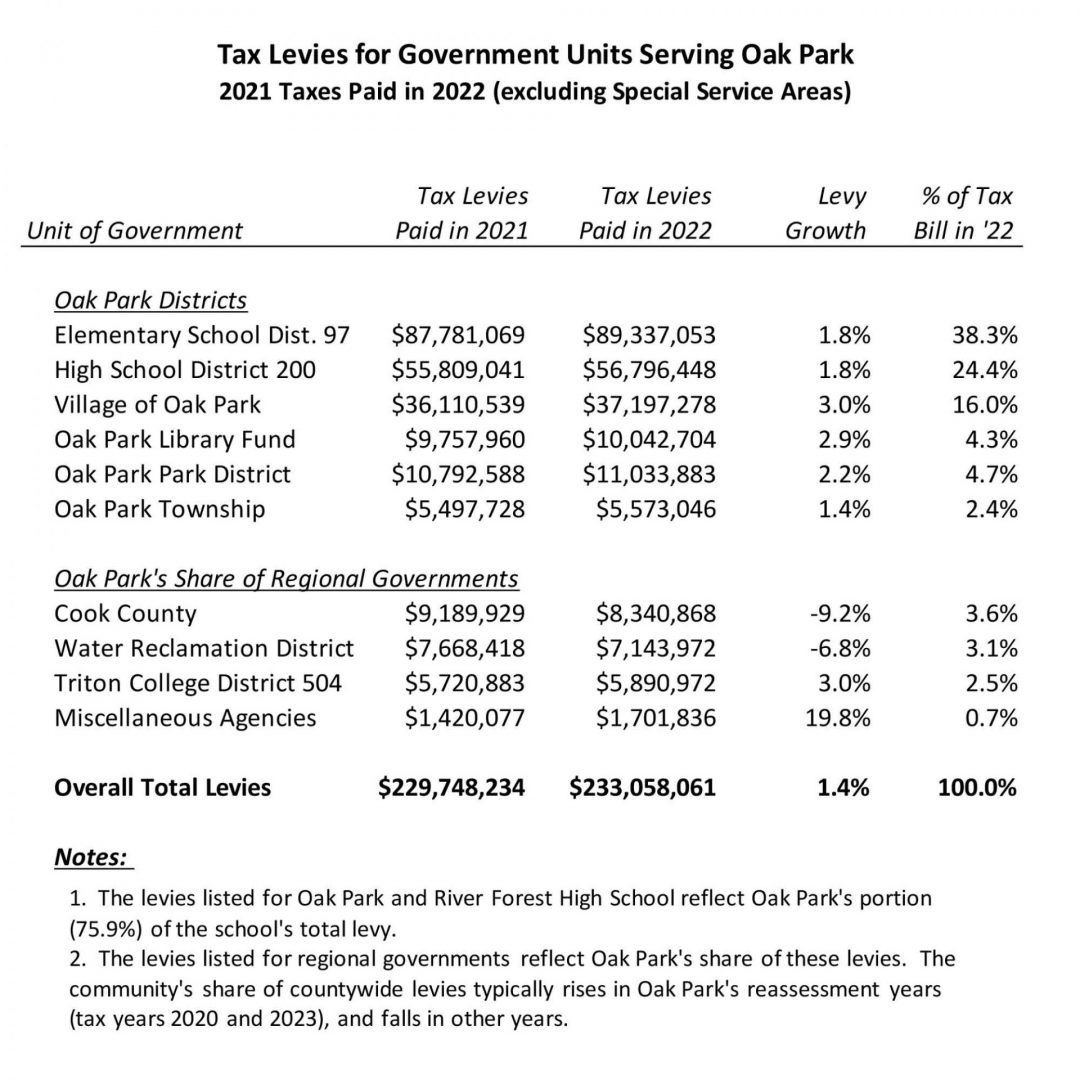 Board of Review Open for Appeals for Oak Park Properties

Thus, a property that comprises 1% of the total assessed value of Oak Park pays 1% of Oak Park’s total tax burden.

Spending increases will raise the community’s overall tax burden, and changes in your property’s share of the burden will determine whether it pays a larger or smaller portion of the increased community-wide tax burden.

Taxpayers requesting assistance with their appeals may call 708-383-8005 to request a phone appointment.

Applications for Senior Property Tax Exemptions have been mailed.

A new law in 2019 provides automatic renewal for the Senior Exemption; it is available to all homeowners 65 years of age or older, regardless of income.

All veterans who receive the Disabled Veterans Exemption are entitled to property tax savings.

Why did the high school’s tax levy fall by $4.5 million?

In 2017, the state legislature approved a new program that provides state aid to school districts with very high property tax rates.  This year, twenty-eight Illinois school districts, including Oak Park and River Forest High School, qualified for financial aid under the new program.  The program provided the high school an extra $3.8 million in state aid this year, but in exchange, the school had to reduce its property tax levy.  This year’s levy is $4.5 million less than the levy from last year.

Ordinarily, the high school and most other taxing districts have the right to increase their tax levies by an amount equaling the annual rate of inflation.  If the school had not received the extra money from the state, it would have sought an inflation-level tax increase this year, and the result would have been a 4.4% tax increase for most property owners in Oak Park.  Thanks to the extra state money, however, the typical tax increase in Oak Park is just 2.1%.

Local taxpayers should enjoy the tax relief provided by the new state program, but understand that it may not last.  The high school should remain eligible for this increased aid from the state for a number of years, but the additional money is not guaranteed, as the state could fail to fund the program or alter the eligibility rules.  In addition, program rules require the school district to reduce its tax levies in the initial year of the program, but apparently, do not require tax reductions in subsequent years.  Thus the duration of this year’s tax relief depends on decisions of the state legislature and the high school board.

Given the reduction in the high school’s levy, why was there an overall increase in local tax levies?

The reduction in the high school’s levy was offset by tax increases from local governments that did not receive new state aid targeted at reducing property taxes.  These increases, however, were generally moderate.  For example, the Township, the Park District, and Oak Park’s Village government each posted tax increases of about 3%.

The biggest local tax increase this year came from elementary school district 97.  The primary reason for its 4.1% increase relates to the continuing impact of an error made two years ago, when the school district received $2.6 million more from a referendum than it expected.  To make up for overtaxing two years ago, the school reduced its tax levies last year.  With a 4.1% tax increase this year, District 97’s overall levy is now close to the level it would have reached if the district had collected the correct amount of money in 2017, and then received inflation-level tax increases in the next two years.

Can I do anything to reduce my current tax bill?

If you are eligible for a homeowner, senior citizen or other exemption but did not receive one, the Township Assessor’s office can assist you in obtaining a revised bill for a smaller amount.  If you have received all exemptions for which you are eligible, you likely will not be able to do anything about your current bill.

Can I do anything to reduce next year's tax bill?

Between July 1 and July 30, the Cook County Board of Review will be accepting appeals from Oak Park residents for next year’s taxes.  Residents may call the Oak Park Township Assessor’s office during the appeal period to schedule an appointment for help in preparing an appeal.  Alternatively, residents can get help at the end of the appeal period by attending a tax appeal seminar sponsored by the Board of Review.  The seminar will take place on July 30 at 6:30 PM at the auditorium of Percy Julian Middle School, located at 416 S. Ridgeland Avenue in Oak Park.

Didn't find what you were looking for?

Let us know how we can help you!